In this article, I would like to share with you Amazing ideas for a paintball party and guide you on how to throw an awesome Paintball Party at home on a budget.

You can base your Paintball party for your kids around a specific theme such as;

Kids absolutely love video games and they will enjoy reenacting their favorite games even more.

You can have kids complete missions such as save the hostage, capture the flag or shooting mock-ups of zombies all whilst dressed in full camouflage if they are into military video games or dressed as a Halo Commander.

Imagine kids dressed up as Cowboys and Gunslingers of the old West.

Some great activities can be doing gun duals where kids have to draw their pistols to shoot the other, the fastest will win.

If you are planning to have duals you should probably get a Pistol Paintball Gun, click to see the current price on Amazon.

You can reenact the Revolutionary War for Independence (Great Idea For 4th of July) with one side being freedom fighters and one side being the evil redcoats.

A simple tip here let the freedom fighter wear all blue shirt preferably a long sleeve shirt and the redcoats wear an all redshirt.

One great Paintball Party idea I had was to do a Star Wars paintball party. Kids could dress up as Storm Troopers or be any of their favorite Jedis- I would be Master Yoda. And yes I am one with the force.

One adult could dress up as Darth Vader and kids have to task to fire paintballs to take him down. Just ensure Darth Vader wears a Paintball mask to keep him safe.

A Halloween paintball party might be fun you can have kids using zombies and witches as paintball targets. Also, Halloween is the perfect time for having kids dress up in their favorite costumes and having them have a paintball battle.

Theme-based parties can be pricey since costumes can be pricey my advice on this is that you spread the cost around. Inform guests of the theme and ask them if they can make or buy their own costumes.

These games can be played stand alone they don’t necessarily need a theme yet they can go perfectly well with any the above listed Paintball Party Themes.

This time-honored game is a perfect fit for Kids Paintball Party.

For those who don’t know, capture the flag is basically where individuals compete to get to a “flag” before any other participants.

At our last Paintball Party, we had two pairs of participants compete against each other. We made our own Paintball field using plyboard as walls and we planted a flag (A Mop Stick with a Pillowcase) in the middle, for kids to get to. If a participant is hit by a paintball while attempting to get the flag they get eliminated.

The aim of the game was to help teach kids to work together. To succeed one team member had to lay down protective fire as their team member goes for the flag. If both members went for the flag they were likely to lose.

Next time we plan to get more Paintball Guns so as to have bigger teams competing against each other.

Possible Variation of Capture the flag;

Time Sensitive– You can set time limits for getting the flag this will cause both parties to try harder rather than just wait around. I think this would make capture the flag a lot more exciting.

Moving the Flag– You can place the flag in the middle yet make a stipulation that when a team gets the flag they have to move the flag to another location to win. This will add a lot more movement and exercise.

Planting the flag in a different location– What I am imagining is that each team would have a turn with the flag in their territory and the other team has to get the flag from them add a time limit to this and you are bound to have a blast.

Multiple Flags- you can have both teams have flags and the aim is to capture both flags to win.

Imagine those target practice games you would play at an amusement park to win a teddy bear.

Now using the same concept except with using paintball guns to fire at the target.

This is a perfect game for a kid’s Paintball Party if you have a limited number of paintball guns. Since you can have one gun and just have kids take turns.

What we did was we used regular plastic Coke and Pepsi bottles to work as targets, I added some sand to the bottles to keep them from getting knocked over by the wind. Don’t fill them up too much just enough to keep them up.

We placed the bottles on a table so that it could be in line of sight rather than have the kids aim downward.

Both kids and adults took turns shooting. Plus we constantly kept moving the table with the bottles, further and further to make the game more challenging.

Another great option is using balloons tied on strings and attached to the ground or on the ceiling as targets, maybe a prize for anyone who can pop a balloon. This might be a lot of fun and challenge, with the wind constantly shifting the balloon making it a moving target.

By this I mean the normal paintball games played at paintball fields.

Regular paintball basically is a game of elimination where teams have to hit the players of the opposing teams with paintballs to eliminate all of them to win.

To play regular paintball you are gonna need a fair amount of space and something to act as structures, I would use plyboard which is cheap and easy to set up and take back down.

Time limit – By imposing a time limit on the game forces kids to take more risks and adds a greater sense of urgency and excitement to the game. Also, it prevents anyone from purposely dragging out the game which allows everyone to have an equal turn.

What I would advise is that you set up the paintball games to have a ten-minute limit and the team with either most hit or most players left standing the winner.

Division of players  I know this would be controversial but hear me out. Imagine dividing players by either gender or age and then letting have to play against the opposing side.

This would add to the friendly competition. The boys vs girls argument of who is better.

Everyone is gonna be more passionate when playing a lot of pride would be on the line.

If you are thinking about age division just ensure you are there to supervise and make sure you don’t have teens playing against kids.

This involves setting up a triathlon like  Paintball course. Where kids have to run through a maze-like paintball course with various obstacles to overcome, such as

Imagine setting up an obstacle course where kids have to run through an inflatable pool, duck and crawl under a wire field, climbing over walls with bars to assist, all the while having to hold their paintball guns and shoot at targets and dodge paintballs being fired at them.

Let the kids race each other or time each participant to see who is the fastest at running the paintball marathon.

I got this idea from watching those army training courses from the movies that recruits have to run through.

Prizes should be given out to the winners for all the activities. It doesn’t have to be extravagant we gave out a snicker bar and a Hersey bar every time someone hit a bottle or won a round in capture the flag.

If you intend to have a theme based paintball party it would probably be a good idea to have your food based on that specific theme, like for a Star Wars theme Paintball Party you can make a lightsaber cake.

Now, these are some Paintball Food ideas if you plan to have a regular Paintball Party with just Paintball Activities which I gonna get to in the next section.

My wife informs me that this is relatively simple to bake and design.

What she would recommend doing is that you use a regular cake and then you can design it using icing be it chocolate or Buttercream, then add on top little edible candies such as Sixlets click to see the price on Amazon, which are round colorful chocolate candies that look like Paintball Pellets.

If you are an extremely good baker with lots of time you can design your cake to look like a paintball gun or if you have a budget order one from a baker.

Any normal kid-friendly beverage would suffice what I would do is make multi-colored ice to go with kids drinks.

To do so just add and mix food coloring to the water before putting it in the freezer.

What You Will Need For A Paintball Party:

The main thing you will need, are good Paintball Guns.

For Parties with kids Ages 9 and up:

The JT Splatmaster is very affordable, simple to use; all you need is the gun and paintballs no compressed air. It is designed to be kids friendly.

If you are dealing with older kids such as teens and you have a bigger budget I recommend:

For the Cronus, you are going to need to take more precautions such as to ensure kids wear paintball masks at all time since these are more powerful guns.

Also, you are going to need to find where to fill up your gas canisters to power the Cronus– Google around most Sporting Stores and Paintball Fields offer this service.

To understand both the JT Splatmaster and the Tippmann Cronus and to find them at an affordable price I recommend you click and Read my Article Best Paintball Guns for kids.

Once you have kids firing Paintballs at other kids you are gonna need paintball masks to protect their eyes.

Check my article on Best Paintball Mask For kids I give my recommendations for affordable Paintball Masks you can skip to the end of the article for a budget paintball mask.

The amount of space that you are gonna need for a paintball party depends on; how much kids are invited and the type of paintball activities you have planned.

I like Plyboard but a great alternative is using those big garbage bins (What you can do is borrow a few garbage bins from your neighbors and wash them out, then fill them up with something, such as sandbags, to keep them from falling down)

Why Have a Paintball Parties

I would like to leave you with a quote that encompasses why “Our Kids only get one childhood, Make it Memorable”

I hope you found this article helpful I would advise you to check out my article on where I look at the question of whether Paintball is safe for Kids? 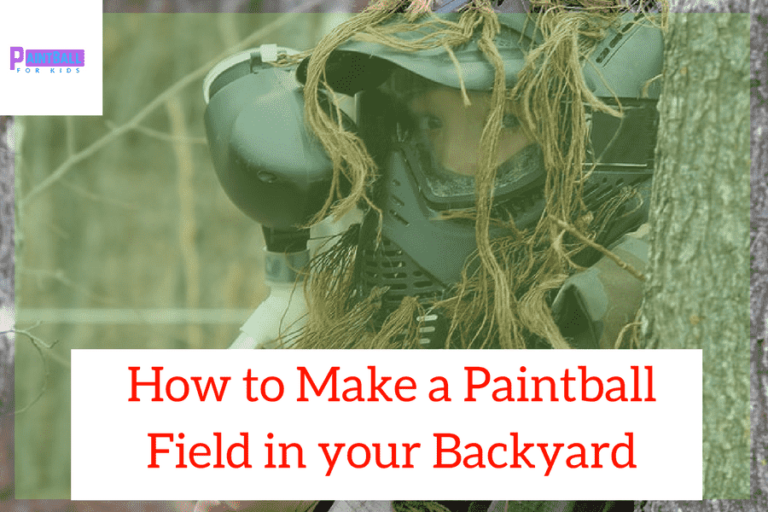 In this article, I would like to guide you step by step on how to set up a paintball field right in your own backyard. Now If you are looking to have a Paintball Party in Your Back Yard you should probably check out my article Ideas for Paintball Parties at home. What are the…